After our monthly breakfast ride several of us made our way over to the Bikers Against Child Abuse Ride (B.A.C.A.)  Those that made the ride were Mike Stoddard, Dave Lehman, Stan Thibaut, Steve & Bonnie Mathews, Mike Martin and myself.  The ride started @ Merles Auto Parts on Dodge Blvd and ended at the Marine Corp League on 29th St.  The ride took us all over the Tucson area even out toward Saguaro National Park.

They offered a great Bar-B-Que dinner after the ride.  They had lots of silent auction items as well as raffles, and of course the 50/50 and high hand and low hand.  Unfortunately yours truly must be losing his touch since I did not win a thing.  High hand was four of a kind.  Best I could come up with was an Ace high straight.  Since my Gold Wing was in the shop I had to ride on four wheels but that did not stop me from getting my wheels washed by the bikini girls.

While they did not ride in the poker run both Patti Thibaut and Silva Stoddard showed up after the ride. 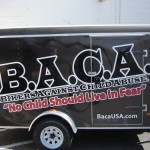 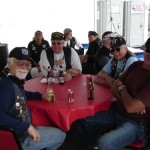 We had our monthly breakfast ride on Saturday March 12th.  This month it was @ Sunny Daze on S. Campbell.  We had a good turnout.  Those who made the ride were: 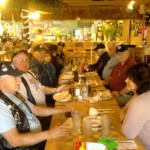 After our start at the Chevron we met up with Norm H. in Catalina.  From there we headed up 77 to the 79 turnoff.  Going north to Park Link Dr we headed west toward Picacho Peak where were turned onto the frontage road and went through Eloy and Casa Grande.  After jumping on the Interstate for one exit we head back east toward Coolidge.  Getting momentarily, the memory is the second thing to go, lost we finally made our way into Coolidge and then back on to route 79 south.  We traveled about 20 miles to the Cadillac Chaparral Steakhouse where we had a great lunch and time to chat.  Can’t beat a $12 Rib Eye Steak.  After lunch it was back on the road south towards home.  After a couple of guys needed to top off for gas we all split and went our separate ways.  All in all a GREAT day of riding.  Temps started out in the 50’s but soon climbed to the mid 70’s until after lunch when the temps were starting to go down into the upper 60’s.  A total of 192 miles were ridden today.

Below are a few pictures of the event. 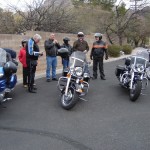 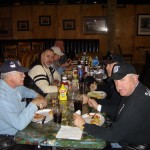 Well 6 members/family made our February dinner ride.  Those in attendance were Rich Fancher & Debbie, John Falzone and Garnettea, Bev and your truly.  Dinner was great as usual and the company was better. 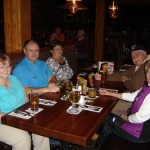 Well we tried a new restaurant for our monthly breakfast ride.  Actually we had been there once before in 2010.  While there were only 7 people at breakfast those in attendance seemed to like the place.  We had a private room like we do at the Vail Steakhouse.  Those in attendance were: Stan, Harry, Mike Proctor, John, Norm, Davis, and our newest member Jim Edwards. 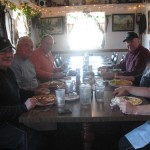 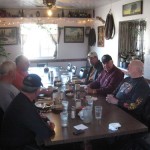 Well we made our annual trek to the Renaissance Festival again this year.  Those that made the trip were: Alan Stewart, Susan Wagner, and their son Brian, Steve and Bonnie Mathews, Bev, myself and our newest member Dave Lehman.  Some of you may remember that Dave was a member several years ago.  It was a GREAT day for a motorcycle ride.  Weather could not have been better.  Obviously everyone else thought the same way.  When we got there we had to WAIT in line to get in for 45 minutes.  As I said it was worth it.  Of course we saw DED Bob and many others.  I have made a photo album in the “Photos” tab at the top of the page.

It’s that time of year again for the Arizona Renaissance Festival in Apache Junction.

The festival Begins on February 12th and runs consecutive weekends until April 3rd.

Reservations cannot be made until October 2010

Presented by Sun Riders M/C.   Benefits Aviva Children’s Services.   Pre-Party is from 1pm-6pm at the Holiday Inn on Palo Verde.   If you registered for the parade on 12/12, you will be able to pick up your pre-registration packets.   Come and hangout with us and with your fellow riders the day before the parade!  Great food and drinks.  Food and drinks will be sold there.  Live music. 50/50.  Vendors.   Kids are welcome to come.   Bring the family. 1pm
Holiday Inn
4550 S. Palo Verde Rd.
Tucson, AZ
Robin: (520) 312-8120
Tucson Sun Riders