I met John Chruscinski at Denney’s Restaurant on E. Broadway when he first came out to visit Tucson and I was still in Patrol in the mid 70’s.  John was an Ohio State Trooper back then.  He told me he wanted to come out to Arizona and live, but wasn’t sure when.  We talked motorcycling, weather, and where we could ride.  He ended up moving out here and working for the AZ Highway Patrol, as it was called years ago.  Now they refer to it as DPS, Department of Public Safety.

We got together when he returned and it wasn’t until about 1990 we started talking about the Blue Knights.  He told me his conversations with John Blaser, a fellow AZ Highway Patrol Officer, and they had started to plan a local chapter.  Tragically John Blaser was killed by a drunk driver while investigating an accident involving another drunk driver.  I was in TPD Motors then and rode in his funeral.

John Chruscinski and I had further discussions about forming the chapter and I was able to arrange for us and interested LEOs, to meet at TPD’s South Division meeting room.  We had a small group, several Highway Patrol, several TPD and one PCSO personnel show up.  We applied for membership as a chapter and received our Charter on March 2, 1991.

As we started having monthly meetings, we began to talk about what we wanted to wear as far as vests and their color.  We also discussed the fact that we wanted to make our chapter logo a little more detailed to distinguish our chapter from the National logo.

We decided we wanted to wear a black leather vest, as we did not really like the light blue that National wore.  As we planned our chapter logo, we thought about our state and what things make it a little different from other states of the Union.  We knew we wanted to have the Blue Knight on his horse as the “Center Piece,” but we also decided to include some things that reflect our state.

First we decided to put the Arizona flag colors as background for the Knight.  Then we included the Saguaro and Organ Pipe cactus plants.  We encircled it with our name, but it seemed unfinished.

After further discussion, we wanted to honor our Native American tribes in Arizona, as there is much historical and social influence that is evident throughout the state.  We elected to put a circle of eagle feathers around the outside of our logo, as it is a sign of power and strength.

I later learned, from a brother Blue Knight from a tribe in New Mexico, that a circle of feathers as we display it represents all of Mankind as one people.  Learning that made our logo design that much more meaningful and something to hope for in the future.

Our chapter enjoyed many rides together and for several years.  Every October, we rode a memorial ride in honor of John Blazer’s memory.  Just a little history of our start as a Blue Knights chapter. 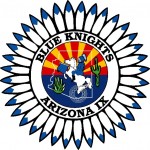