The Moving Wall was in Three Points this weekend.  This was the ONLY stop in Arizona for the Wall.  Bear Campbell, new member Mel Tillett and his wife Marsha, Dan Figueroa, and myself made the ride to honor all Fallen Heroes.  While Dan was there in spirit for our Chapter he was actually on duty with the PCSO directing traffic into the VFW @ Three Points.  We met at the Ina Road Harley Davidson for morning coffee before KSU at 9:30.  There were so many bikes we broke up into 4 groups of riders for the ride to Three Points.  There were well over 200+ motorcycles of all makes and models and this was in our group only.  A lot of other riders came during our time there.  They were serving both breakfast inside and had hamburgers and hot dogs outside for lunch.

If you have ever been to the “Wall” in D.C. this is a traveling and moving replica of it.  It was an honor and pleasure to be there representing the Blue Knights.  Here are a few pictures.  I took so many pictures of the bikes and people that I created a folder under our “Photos Page.” 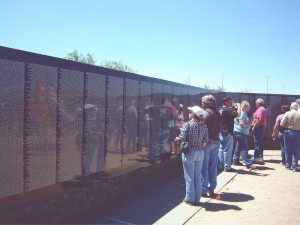 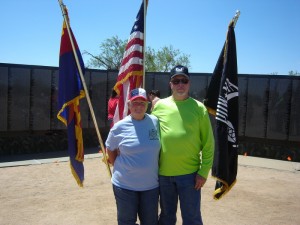 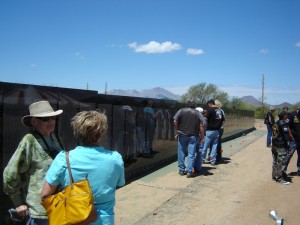