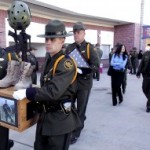 A public memorial service was held in Tucson for a U.S. Border Patrol agent killed in December in a shootout with border bandits.

The service for 40-year-old agent Brian A. Terry was held at 11 a.m. on Jan. 21 at Kino Stadium, formerly known as Tucson Electric Park.

Terry was waiting with three other agents north of Nogales on Dec. 14 when a gun battle with the bandits began. Four suspects were arrested.

FBI spokeswoman Susan Herskovits would not provide details of the investigation.

Bandits have long roamed border areas, robbing and sexually assaulting illegal immigrants as they cross into the country.

A memorial service for Terry was held Dec. 22 in his native Michigan.

Those in attendance from the Blue Knights AZ IX Chapter were Harry Barden, Norm Hubbard, and Ron Friend.

Photos of the proceedings can be found in the “Photos” area at the Top of the “Home Page.”

THE FOLLOWING IS FROM THE ARIZONA DAILY STAR JANUARY 22, 2011

More than a month has passed since Border Patrol Agent Brian Terry was slain on the job, but grief over his death has not subsided in Southern Arizona.

More than 1,200 people turned out Friday for a memorial service honoring the 40-year-old agent, killed Dec. 14 near Rio Rico in what authorities described as a shootout with border bandits.

Authorities have yet to charge anyone in the killing. Several suspects were taken into custody a short time later, but so far they are facing only immigration-related charges.

Kino Stadium, formerly known as Tucson Electric Park, was a sea of flags and uniforms as a Border Patrol chaplain opened the ceremony with tears in his eyes.

“Mere words cannot express our sorrow when one of our own falls,” said Mark Vander Lee, a chaplain for the Border Patrol’s Nogales Station.

Terry, who served as a Marine in the Iraq war and as a police officer in his hometown in Michigan before joining the Border Patrol, is “an example of strength and devotion to duty,” Vander Lee said.

U.S. Rep Gabrielle Giffords was there in spirit, even as she was making her way to Texas by air ambulance to begin rehabilitation.

Giffords aide Ron Barber attended the memorial service on the congresswoman’s behalf, despite being recently released from the hospital after he was wounded in the same shooting spree as his boss.

Terry joined the federal agency at age 38, and quickly advanced to a position with a Border Patrol tactical unit that takes on demanding assignments.

“Brian was a man who believed in service,” said Kurt Martin, who spoke on behalf of the slain agent’s family members, who traveled from Michigan to attend the Tucson memorial.

Terry knew the dangers of his job but “loved what he did, and who he did it with,” Martin said, addressing the hundreds of fellow agents in attendance.

At the request of Terry’s family, his tactical unit colleague, Agent John Bonbright, read aloud from a letter Terry once sent home to loved ones. In it, the slain agent describes his on-the-job credo.

“I do not fear death, for I have been close enough to it on enough occasions that it no longer concerns me,” the letter said.

“What I do fear is the loss of my honor and would rather die fighting than to have it said that I was without courage.”

Police officers, sheriff’s deputies, firefighters and military veterans from around Arizona took part in the service.

Some, like Marine Corps veteran Al Garcia of Tucson, arrived just after saying goodbye to Giffords outside Davis-Monthan Air Force Base.

“I came to pay my respects to a fellow Marine,” said Garcia, 47.

Terry, he said, “was someone who put his life on the line constantly. That says a lot about him.”

“My husband is working today and couldn’t be here so it’s our duty to come and show support,” Amorette Hernandez said.

Any time an agent is killed in the line of duty, it sends a chill through the families of all agents, she said.

“Whenever one of ours is taken down, we realize it could have been any one of us. It makes me thankful for every day my husband gets to come home.”

Contact reporter Carol Ann Alaimo at calaimo@azstarnet.com or at 573-4138.