One day in 1974, Ed Gallant & Urban Dyer had just come back from a motorcycle ride and went to the Black Knight Restaurant in Brewer Maine. They talked about getting a group of police motorcycle people together and starting something up in the area to ride together. They decided to call me (Chuck Shuman) as I was on duty, a sergeant, and like they said, a good speaker and promoter to see what I thought of the idea.

I met them for coffee and told them I thought it was a great idea. They asked me to help and I told them I didn’t know how to ride a motorcycle and didn’t have a motorcycle license – NO PROBLEM – let’s get started! Urban took me out on the back roads. I bought a Yamaha 250 and he taught me how to ride.

The three of us put posters around the area police and sheriff’s offices to see if anyone was interested in doing this. We planned a meeting at Brewer Police Department. Besides me, seven showed up: Ed Gallant, Wayne LeBree, Mike Hall, Doug Minor (dec), Joel Rudom (dec), Chuck Gessner (dec), and Bill Robinson (dec). We talked and set up another meeting and that’s how we got started. Twenty-three showed at the second meeting from the Sheriff’s Office, Probation Dept., Bangor and Brewer Police Departments.

We knew we had to have by-laws and I tried in vain to find out how other clubs got started. At the third meeting, we decided we needed bylaws and I checked with the District Attorney and he added that we needed to be a non-profit corporation. We decided to first have an election.

I was a big mouth and speaker and was elected the first president. I appointed a committee to draw up bylaws and we were off and running. By then I had my motorcycle license! The rest of the elections were; Vice President Bill Robinson, Secretary Joel Rudom, Treasurer Ed Gallant, with the Board of Directors being Mike Hall, Chuck Gessner, and Wayne LeBree.

We next needed a name. Chief Dave Koman of the Brewer Police Department suggested Blue Knights as it was a popular police Television show starring George Kennedy. We decided we needed a Logo. Ed Gallant found an old Interstate 95 sign which was stored in the Brewer PD property locker. I had sent away for a motorcycle insignia that was commonly worn by Police Motor Officers which was a winged motorcycle wheel. I gave it, along with the sign to Sgt. John Bryant who was the police artist for Brewer Maine and asked him to draw a knight on top of the wheel insignia and put it in the I95 sign. Our logo was born!

I decided I needed a jacket while riding and went to a sporting goods store and found a light blue (very similar to what the vests are today) and white long sleeve warm-up jacket for $12.95. My wife Chris sewed the new logo patch on it and it was accepted as our Blue Knights Club Jacket.

We were on our first ride as a club and I was the lead bike of the nineteen riding. We were going to Calais Maine about 90 miles from Bangor. While I was riding I kept looking in my rearview mirror and saw how proud and straight the guys were riding. So I started ending all our mail with “Ride with Pride”. The motto caught on and that’s how for nearly thirty-six years it has stuck. I am very proud of that!

I was the public relations man for the Brewer Police Department and a sergeant at the time. We had a dinner ride to the Lucerne Inn and I invited the news and T.V. to come. The story was picked up by the UPI and AP and published all over the United States!

One day in September, I was called off patrol to meet with two police officers from Massachusetts who had read about the club: Dick Delesdernier, a Massachusetts State Police Officer and John Darraba, a Brockton Police Officer. It happened that they showed up on the same date as our meeting and attended. They were so impressed they stayed with me for two more days then returned to Massachusetts and spread the word.

I, Wayne LeBree, and Ed Gallant were invited down to a meeting at the Brockton Massachusetts Police Department. They had seventy-four officers from different parts of Massachusetts at the meeting and I told them what we had done. When we left, the seventy-four had signed up and went on to be MA I until they went on to form their own chapters around Massachusetts. By the way, I, Wayne and ED had done all this on our own money. We did not have a treasury. We then went to Newington Connecticut and started a Chapter there at a meeting.

The mail started to flow in from all over the US and Canada to me and checks and many questions on how to start chapters in different areas. With my two daughters, Lori and Vicki, I answered every letter from what was our first office, the basement of my house in Brewer Maine.

We planned our first convention at Squaw Mountain Inn in Greenville Maine in July of 1975. We didn’t know what to expect. I floated a personal note with the bank for $1,000.00 and had t-shirts and sweatshirts made with our logo. We sold them out in one and one-half days and had many more orders!. We had one hundred seventy police motorcycle blue Knights and their families attend. It was a great time. A couple from Washington State, the Beems rode all the way. Also an editor for Road Rider magazine, Roger Hull showed up and hired a photographer to do a big story which was published in his magazine. 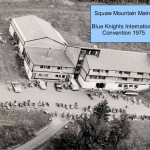 This was started as a family club for police officers and I hope it stays that way. Blue was always our color, for vests, helmets, and whatever. I don’t know to this day how some changed to Black. We are the Blue Knights and remain Proud.

I am just a seventy-three year old guy, sitting back and watching the club grow. For three of us who spent all our grocery money to start this organization, it has come a long way from my basement to a million dollar entity with office workers.

I have enjoyed meeting new friends from around the world as you know and will be on the sidelines as well as Wayne if you need anything. I had sent my original Blue Knight jacket to the International office several years ago but have asked them to return it to me so that we can get pictures and let everyone see what was the start.

The rest as they say is history.