We had a very nice breakfast at the Old Times Cafe on Saturday. Fortunately Friday I received the $5000 check from Markel American Insurance Co., which our chapter won for requesting the most insurance quotes concerning Markel Motorcycle Insurance. As I mentioned in a previous email, I contacted Jan Upchurch, the current President of C.O.P.S. Arizona Chapter, and she was able to come for breakfast. After a filling breakfast, on behalf of our chapter, I was honored to present Jan with the $5000 donation. I scanned the certificate and have included it and several pictures Patti took during breakfast. Those in attendance were-Stan and Patti Thibaut, Bud Welch, Jim Kneup, Jeff and Kelly Jamieson, Russ and Jackie Cole, Will Harris, Norm and Mary Hubbard and our Guest of Honor, Jan Upchurch.

I was able to ride my motorcycle to breakfast, but since I am still having some pain in my seating area, right leg and right hand, Patti drove her car. We had an interesting experience a little later in the day. I stopped at the BMW shop, Iron Horse Motorcycles and then met Patti at the Starbucks at Broadway and Houghton. While relaxing there, I saw two male teens running from the side walk with large protein containers from GNC under their arms. I said I bet they didn’t pay for those and then an employee ran into view yelling that the boys had stolen them. I grabbed the keys to the Z3 and as I was getting into the car, another motorcyclists from Starbucks, yelled I’m a cop, I’ll ride with you. Turns out Art was is DPS Officer. They had thrown the items down along Broadway and as it turned out, another off-duty DPS Officer followed in his truck and took custody of the items. Witnesses said the boys had run around the next corner, so we turned and in the next block, we observed them running through a yard. I cut them off as they ran into the street and Art yelled “Stop Police.” After we had the boys in custody, I called 911 and TPD sent units. It was fun and productive. Made a new motorcyclist friend and who knows, after talking with him about the Blue Knights, he will consider checking us out. I learned that the items stolen were valued at over $300. It was a great day. 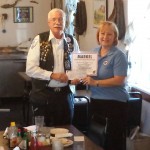 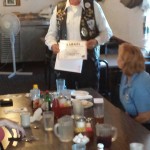 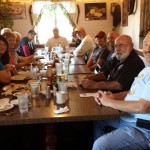 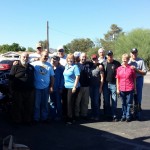 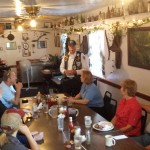